SEIKO: FROM TSUNAMI TO TSUNAMI. 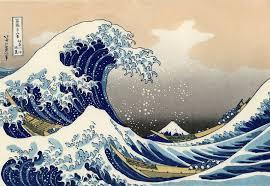 Above is the classic Japanese woodblock print of a great wave or tsunami.  The Great Wave off Kanagawa is a woodblock print by the Japanese ukiyo-e artist Hokusai. It was published sometime between 1830 and 1833 in the late Edo period as the first print in Hokusai’s series: Thirty-six Views of Mount Fuji. It is Hokusai’s most famous work, and one of the best-recognised works of Japanese art in the world. It depicts an enormous wave threatening boats off the coast of the prefecture of Kanagawa, with Mount Fuji in the background.

Tsunamis have had a big influence on Japanese culture

This article covers the early Seiko use of the tsunami symbol and the leadup to the development and production of the Seiko Tuna: diver cousins of the Grand Seiko

As covered in another article, <LINK>, the Tuna was a response to a request for a robust deep diver’s watch which worked as well as a professional diver would hope.

The evolution of Seiko diver’s watches from the rudimentary (from a diver’s perspective) Seikomatic SilverWave, <LINK>, to the professional, is covered in this article.

The first Seiko diver’s watch, the J12082 SilverWave, was 50m waterproof and had an internal rotating bezel.   It was produced from 1961 to 1964 and did not sell well, being downgraded to a cheaper movement during production.

The dial was eyecatching, and while the dauphine hands were luminous, the remainder of the dial did not work well underwater.

The SilverWave used a Seikomatic 603 movement, subsequently renumbered 6201B, which had 20 jewels, but this was later replaced with a more workmanlike 17 jewel 2451/6601 movement.

The back case had a tsunami wave symbol which marked the start of the journey for Seiko diver’s watches to a truly waterproof deep diver’s watch.

The next SilverWave model 69799, and the later 6601-7990 continued with the case back engraved with the tsunami logo. <LINK>

The SilverWave was followed by what many agree was the first Seiko diver’s watch, which had a published depth capacity of 150m.  This model called the Seiko 62MAS-010 has been a truly collectable watch commanding prices approximating $10,000.

There have been subtle variations in bezel height through the life of both models.

The common name is Seiko 62MAS-010 (62 Model AutoMAtic Selfdater) after the 6217A movement used in the watch.   This was a 62xx movement related to the prior SilverWave movement, with a date complication, and only 17 jewels.

The Seiko 62MAS is very collectable, and replacement dials, bezels, hands and modded copies are all available.

Only the essential design issues are covered in this article as the watch is extensively covered elsewhere.

Surprisingly Seiko dispensed with the tsunami wave and instead incorporated a dolphin on the case back.   This had been used on other Seikomatic waterproof watches since 1962.

The case back of the 6217-8000 model is usually worn smooth as it was not heavily embossed, but a rare legible 6217-8000 dolphin back is shown below.  It does not have a serial number. 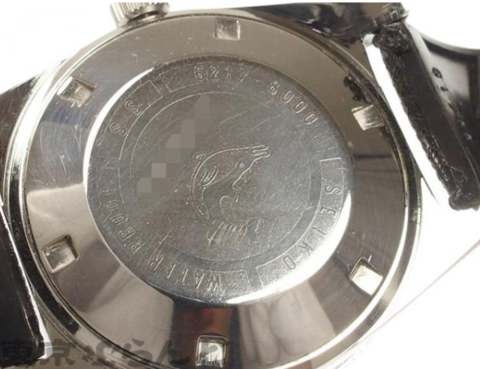 The large crown model followed two months later, the 6217-8001.  It was virtually identical except for the crown but had minor mechanical improvements.

The 6217-8001 model had a more heavily embossed case back again featuring the dolphin, and this has proven to be more wear-resistant.  A good example is shown below.

The serial number indicates a May 1967 model.

The case back of later models were just engraved SEIKO inside a “horseshoe” surround and dispensed with the dolphin altogether.   All models were marked WATERPROOF. 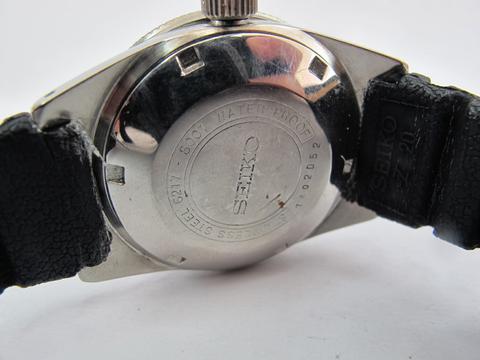 This model was produced in 1967 and extended the waterproof design depth to 300m.  This was a great improvement on the Seiko 62MAS-010 and Seiko branded it Professional.

The main features were innovative:

It featured a count down bezel with Arabic numerals at 10, 20, 30, 40 and 50 and marked only 0 to 15 minutes with dot markers.  A large triangle with lume dot is at zero.  The increased resolution for the first 15 minutes on the scale allows divers to time decompression stops with relative precision during ascents at the end of a dive.

The 6215 movement was derived from 6217.   This is an automatic wind, 35 jewel, 19,800 bph hackable movement based on the 62xx platform.  It is architecturally the same as the 6245 in the GS/Chronometer models but is not as finely adjusted.

As seen below it has circular gold indices, but with square/trapezium indices at 6, 9 and 12-hour markers.  There is a date window at 3 o’clock.

It has gold hands with large lume baton hour and minute hands and a traffic light lollipop second hand.

The dial reads SEIKO Automatic at 12 o’clock, and WATER 300m PROOF and Diashock 35 Jewels at 6 o’clock.

The case back shows the monocoque stainless steel case and the engraving on the back is a “horseshoe” continuation of that on the prior model, the Seiko 62MAS-010.

The dolphin symbol was not resurrected.

The heavy tonneau case is shown below.

The heavy monoblock case continued into the next model which overlapped the production run of the 6215-010.

It featured a screw-down crown and the movement was derived from the 6159A Hi-Beat 36000 bph Grand Seiko, manual wind with quickset date.

This 25 jewel 6159 movement, was derived from the well-respected 61xx movement that ran the Grand Seiko and was confined to professional Seiko dive watches.  It was never used in any other Seiko model.

The dial reads SEIKO Automatic Hi-Beat at 12 o’clock, and Professional WATER  300m PROOF and with the Suwa symbol at 6 o’clock.    The indices at 6 and 9 o’clock are rectangular, and a divided trapezium is used at 12 o’clock.

Initially produced with a click-stop count down bezel, it later became optional for the buyer to choose either a count down or an elapsed time bezel.

Again the same monocoque case was used for the previous model.

The count down bezel is generally found on the 6159-7000 model, with markings every minute is shown below. 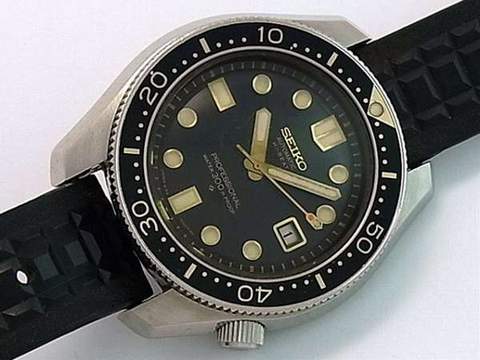 A March 1968 model 6159-7000 is shown below.   The Case reads STAINLESS STEEL 6159-7000 WATERPROOF inside the horseshoe.  The serial number and JAPAN A are engraved in the jaws of the horseshoe.   SEIKO and an open Daini symbol are at the centre of the case back.

The large crown is readily accessible. 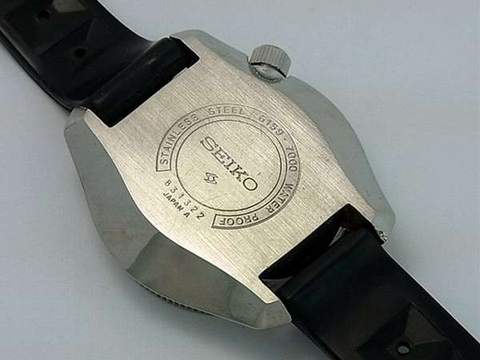 The exploded parts diagram for the count down bezel model is shown below. 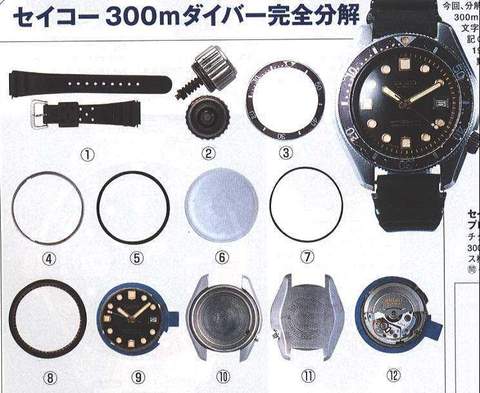 The 6159 model was marketed as a professional diver’s watch and came with 2 straps. Accessories such as a rubber protection ring were also available. 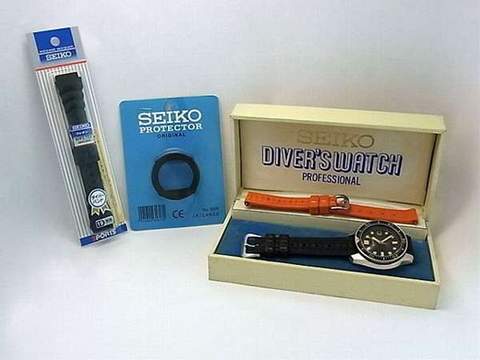 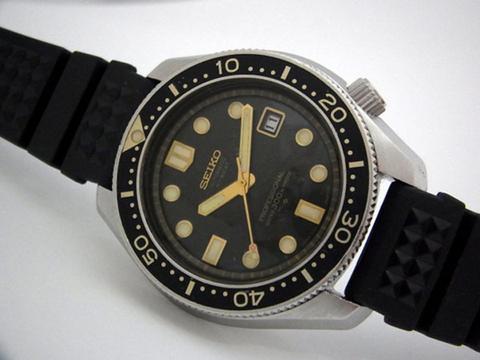 A January 1969 model 6159-7001 is shown above with the original expanding rubber strap.  The case back is shown below, and there is no space in the word WATERPROOF. 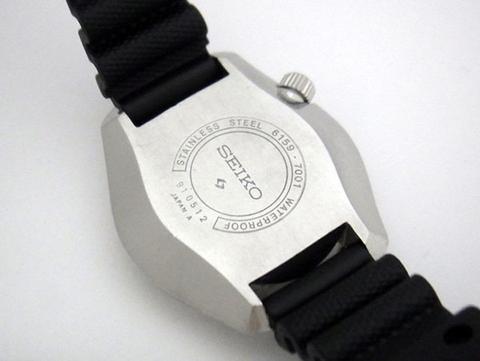 Later models in the series had a grooved ring around the engraving on the case back as shown on the May 1969 model below. 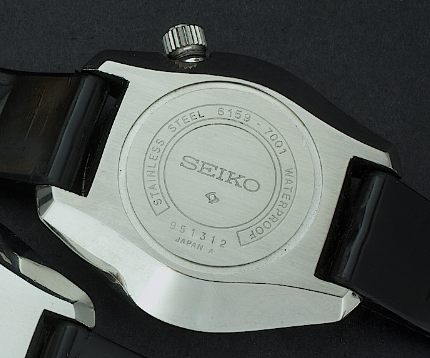 The Seiko diver’s watch development then reached a hiatus from 1969 to 1975 until a truly professional 600m water resistant watch was released: the 6159-7010. 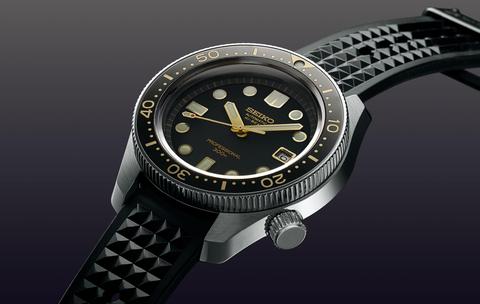 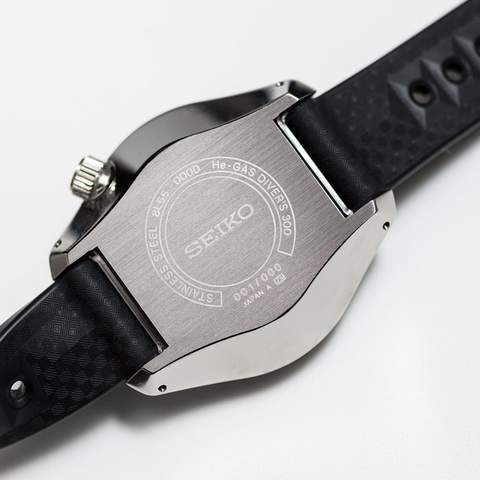 Despite sharing the model number with the diver’s watch above, there is little in common between the models.

This has become known as the Grandfather Tuna 6159-022

Inside the watch beats the 6159B, a Grand Seiko-derived 36000 bph Hi-Beat automatic movement.  It hacks and can be hand-wound.  Date changing is quick set.

Seiko “resurrected” the 6159A movement in 1975, creating the 6159B for their 600m waterproof diver. There is little parts interchangeability between this later movement and earlier members of the family.  It features larger pins to attach the heavier hands of the diver, along with different balance cock and regulating pins.

Two dial variants are shown below the 600 and 600m variants. 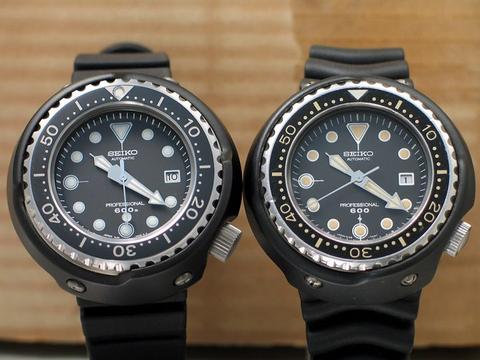 The watch was still marketed as a professional diver’s watch. 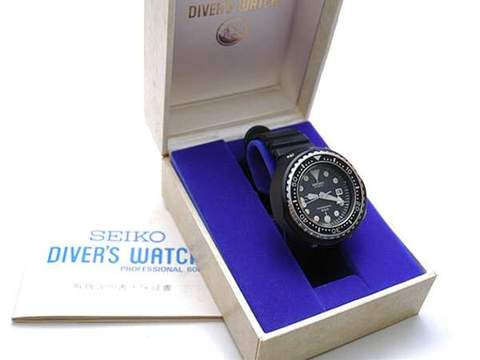 This watch had many firsts, the first titanium case, the L-shaped single-crystal gasket and the ceramic-coated titanium shroud, and is covered extensively elsewhere. <LINK>

With a 600m depth rating, the 6159-7010 dispenses with a helium release valve in part due to very consistent and tight manufacturing tolerances, but also due to the one-piece case and screw-down crystal retaining system.

The case back now reverted to having a logo with the tsunami wave, with an embossed version of the original wave, which then continued in the future Seiko diver’s models. 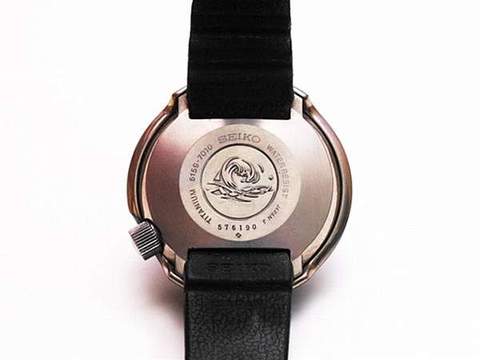 The July 1975 case back above reads TITANIUM 6159-7010 SEIKO WATER RESISTANT JAPAN A.   In the centre is the Seiko tsunami symbol.

The development of the Seiko diver’s watch had now gone full circle, back to the first J12082 SilverWave. 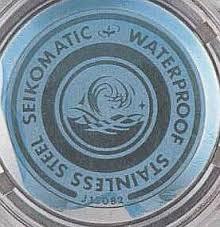 The Prospex re-creation of the 1965 classic is faithful to the original design, but thoroughly up to date in technology. It incorporates the Caliber 8L35 which is specially designed for diver’s use and is made by Seiko in the Shizuku-ishi Watch Studio in Morioka in the north of Japan. The overall re-design was entrusted to Nobuhiro Kosugi, a recipient of the prestigious Medal with Yellow Ribbon and Contemporary Master Craftsman awards. Kosugi has kept faith with the original, as is attested by the 3D embossed hour markers which stand up in sharp relief and yet are an integral part of the dial itself, the luminous dot at twelve o’clock, the slim profile of the case and the narrow bezel. The case is virtually identical to the original, but its diameter has been increased by 1.9mm.

While faithful to the 1965 design, this new Prospex diver’s watch has greatly enhanced functionality. It has a box-shaped sapphire crystal and 200m water resistance for greater reliability and a silicone strap for enhanced wearability both outside a wetsuit and on the wrist. Durability is also enhanced by the super-hard coating which protects the watch from scratches. This hand-assembled and adjusted homage is available in a limited edition of 2,000 from July 2017. 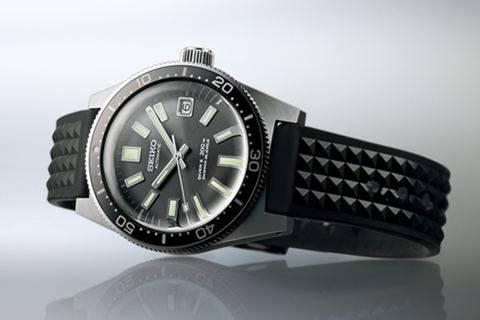 This also has a dolphin caseback. 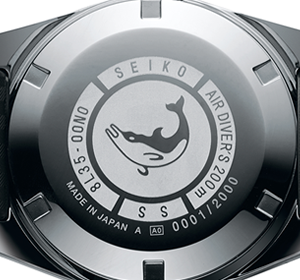 It is usual in these articles to make recommendations, but research has shown that the models above are highly sought after for a variety of reasons.

The grail watch exists for a variety of reasons.

Any will be expensive, as they all hold a place in the development of the diver’s watch and the evolution of the tsunami logo.