After WWII as the popularity of diving moved beyond military and commercial diving, and the cost of Scuba gear reduced, watchmakers moved towards providing equipment for recreational diving where the SEIKO SilverWave emerged. 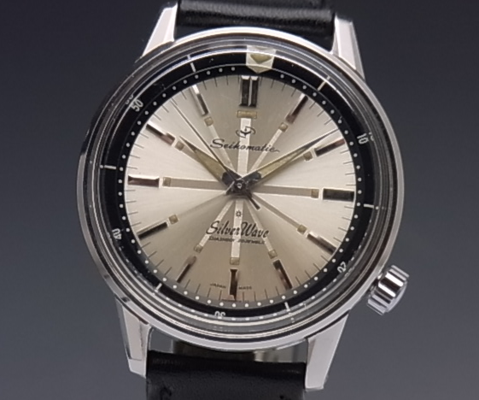 While not a diver’s watch in the true sense, these sports diver’s watches were the immediate precursors to Seiko (and Japan’s) first diver’s watch with 150m depth capability, good legibility and an external rotating bezel, the 62MAS(1965).

Other brands made similar transitions at about the same time.  The Enicar Sherpa articles in this series cover the transition of the dress watch to a sports watch and diver’s watch, and Enicar achieved this by using a waterproof EPSA case made by a specialist company to their specification.

The article on the Seiko Tuna covers the development of Seiko’s diver’s watches into those for a serious professional diver.

One obvious attribute for a diver’s watch is waterproof capacity, which is also required to a lesser degree by outdoor sportsmen and climbers.

The Seiko two-part screw-down case back was a design exercise to obtain a waterproof case, first used on the manual Seiko Cronos Sea Horse of 1960, model J13032, which used a Seikosha 21 jewel Diashock calibre movement.

Seiko was proud of the fact that this watch was capable of resisting 50m of water pressure and marketed it as a diver’s watch, initially without any luminosity, as it had steel applied indices and steel dauphine hands.

The dial reads Seiko Chronos in script at 12 o’clock and features WATER 50 PROOF and Diashock 21 Jewels at 6 o’clock.

Below is the watch with WATER 50 PROOF the most prominent feature on the dial, and an image showing the 2 part case back. 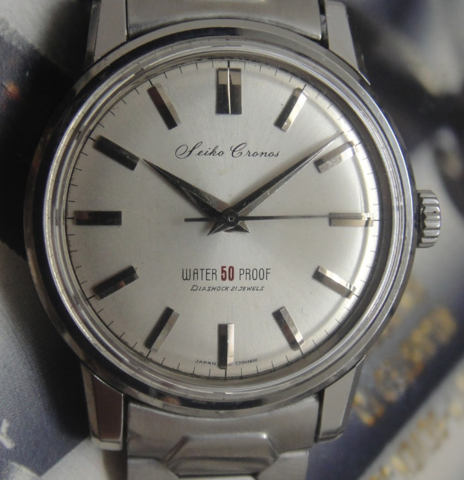 The advertising for the J13032 at the time featured a Scuba diver, and the case back and advertising a Seahorse logo.   This later model below had luminous inserts in the dauphine hands and lume outside the applied indices.  So, in reality, was this the first Seiko diver’s watch?

Below is a clearer image showing the luminous dauphine hands and lume dots outside the applied indices.   The hands are almost identical to those in the sunburst SilverWave J12082 below.

The same screw-down case back was also initially used in the SilverWave J12082 to provide 50m waterproof capacity.

A feature of this first 50m version of the SilverWave, produced under the Seikomatic line, was the screw-down case back (in fact a two-part system, with a separate retaining ring screwing down over a press-fit back with a rubber gasket), which meant the watch was waterproof to 50 meters.

Importantly, the dial was the first Seiko design with a bi-directional rotating inner bezel. It also had highly luminous dauphine hands and lume dots at the indices.

The crown was at 4 o’clock and was oversized so it could easily be used with a gloved hand.  But the crown was not screw-down and the seals could be damaged by impact. 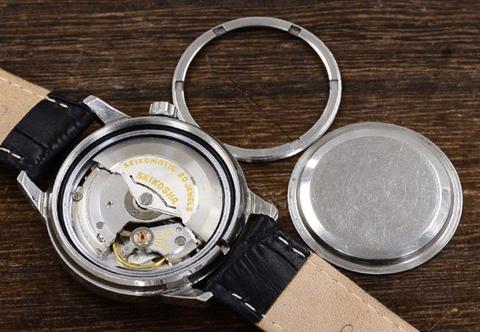 Above is the 2 part screw-down waterproofing system on the J12082.

The watches had a variety of dial combinations, with the early models having an unique silver starburst dial, reading Seikomatic at 12 o’clock and SilverWave Diashock 20 jewels at 6 o’clock.   There is a spinning top symbol above Seikomatic which may be the precursor to the Suwa “swirl” symbol, and the 8 pointed Diashock star is above SilverWave.

Dial combinations were silver (with or without a sunburst), with either a silver or a black plastic inner rotating bezel.

This sunburst dial above has lines on the inner bevel of the chapter ring of the bezel, while other models had dots.

Below is another sunburst model, but the inner rotating bezel bevel in this watch is marked with dots.

The model below has the contrasting black rotating bezel with dots on the chapter ring, still in the original packaging.

And finally a combination with a black rotating bezel with lines on the chapter ring.

The case back of the J12082 featured the diver’s watch tsunami wave  (the first for Seiko), and read  WATERPROOF STAINLESSSTEEL SEIKOMATIC with the Seikomatic spinning top symbol and with J12082 inset into an outer ring. 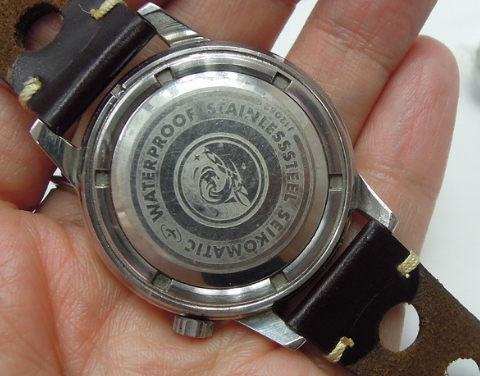 To emphasise the 50m waterproof capacity, another model was released in parallel with the above model with a changed dial. Diashock 20 Jewels was shifted to beneath  Seikomatic at 12 o’clock, and WATER 50 PROOF added to SilverWave at 6 o’clock, and the sunburst was removed from the dial. The rotating bezel had only a dot chapter ring.

This model is described on pages 22, 67 of the book “Japan Domestic Watch Vol.5 – SEIKO Automatic watch”. 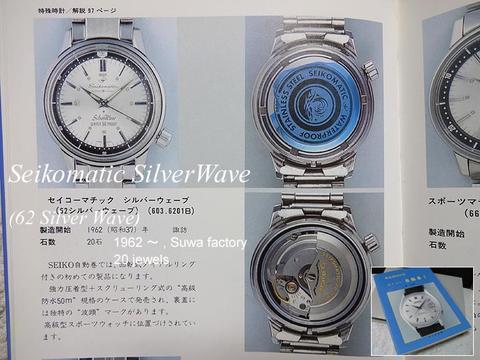 Below is a silver dial, silver rotating bezel combination of the non sunburst version of the J12082.   The lume in the hour and minute hands is squared off at the ends. 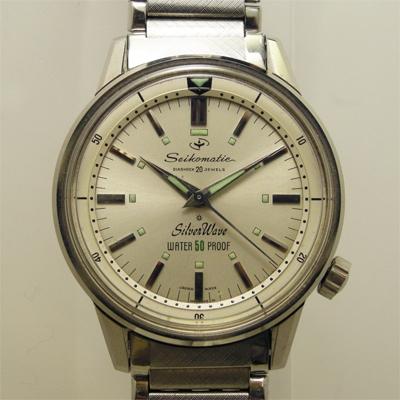 A black (faded) bezel and silver dial combination are shown below.   All the J12082 rotating bezels show elapsed time. 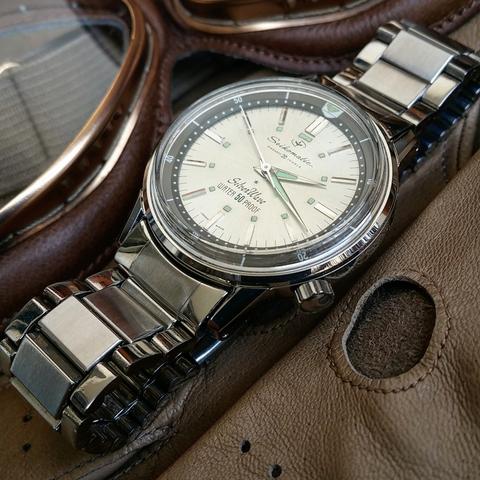 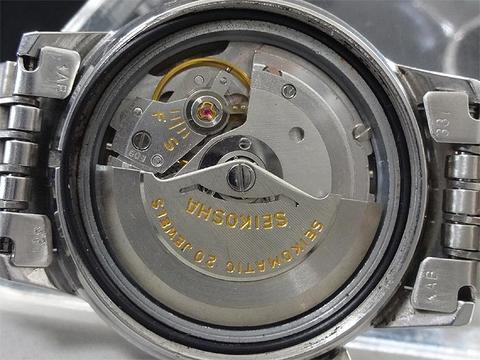 Above is the 20 jewel movement, the 6201B, which with a date complication added was later used in the 6217 movement series, including the World Time and the 62MAS.

In 1964 the Sportsmatic 30m SilverWave was introduced.   This was based on the 6601-8930 Sportsmatic model series (below) which had a hidden crown at 4 o’clock.

The 50m Seikomatic SilverWave diver’s watch was discontinued when the lower-priced version of the SilverWave was introduced. This watch had a lower price because the movement was changed to the 6601 movement {nearly identical to the automatic caliber 2451 movement} (66SW)[66SelfWinder] with 17 jewels operating at 18,000 bph. 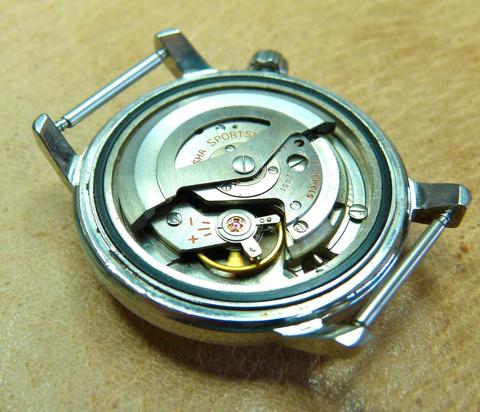 The budget version was marketed as the Sportsmatic SilverWave, with model number 69799, superficially identical in appearance but featuring the slightly more workmanlike 17 jewel automatic 2451/6601 movement with a date complication (above).  By virtue of its press-fit case back, the water resistance was reduced to only 30m.  This lowered it’s appeal to divers.  This watch was produced until early 1966.  Later in the production run the model became the 6601-7990.

It was still marketed to divers.

The 50m SilverWave, as introduced in 1962, was the initial Seiko to exhibit the “tsunami” motif on the case back. The 69799 continued the trend and this motif is still seen today on the case back on all of Seiko’s diver’s watches.  The case back reads 67999 WATERPROOF 30 S.S. and now shows the Seiko issue number, and the case inside reads   SS 679990  Japan  A.

The case back below is from an April 1964 model. 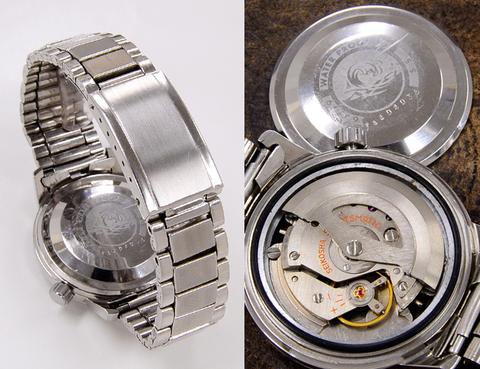 Below is the dial of the Seiko Sportsmatic 69799  model. 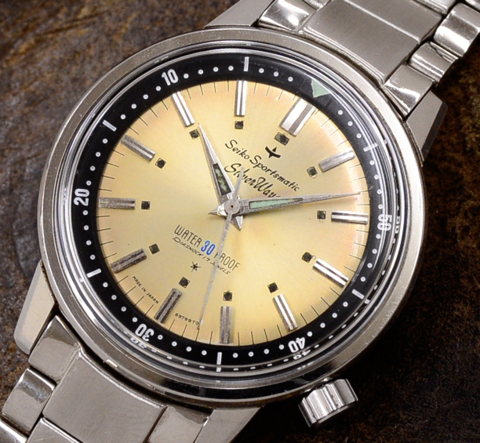 The dial was similar to the J12082 with a revised spinning top logo, Seiko Sportsmatic and SilverWave at 12 o’clock and WATER 30 PROOF and Diashock 17 jewels at 6 o’clock.  The hands were still dauphine style with squared-off lumes, and lume dots were again added to the indices.   The AD symbol indicated applied lettering.

The significant difference for the 69799 from the J12082 was that the bezel was now a count down bezel. 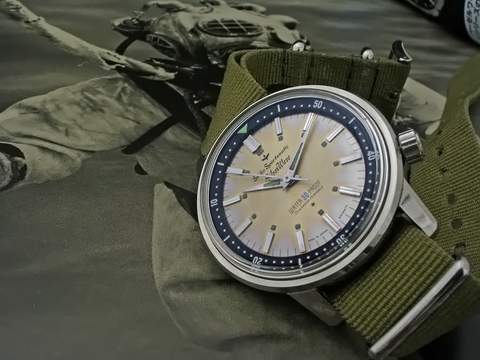 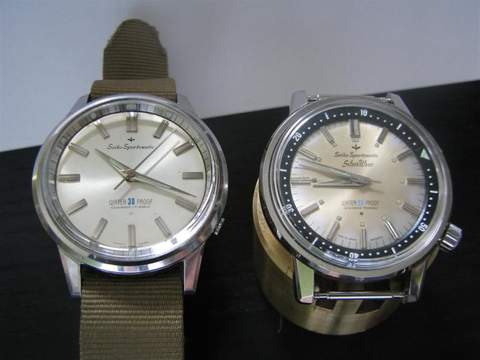 The SEIKO SilverWave 30m came in two versions, a silver dial and a black dial, both with a black inner rotating bezel. However, the bezel on the 30m model is a count down bezel, rather than the elapsed time on the 50m model.  The bezel markers are on the flat of the bezel for this model. The symmetrical no-date dial has a radial brushed finish and applied steel baton markers with lume dots at the inner edge of the markers. The steel dauphine hands have large lume filled centers. The lume Seiko used on these models and on the later 62MAS was a light mint green colour.

Below is a comparison between the bezel markings for the 50m and 30m waterproof diver’s watches.

Due to the type of plastic used, the black bezels tend to fade easily in the sun. Most examples found today have faded to varying shades of grey.

The black dial version is shown below. 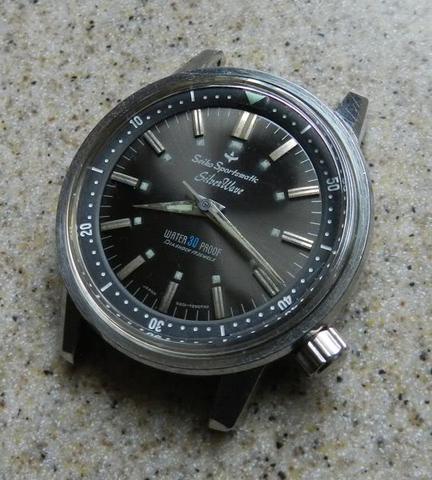 For a diver, perhaps the silver faced dial is more appealing.

This first Seiko diver’s watch is highly sought after.   Later SEIKO SilverWave models produced by Seiko were dress watches and are not discussed in this article.

The 50m and 30m models do not have screw-down crowns, and over time leak during service, leading to corrosion and water staining.  The screw-down case back has 4 interfaces for corrosion. The plastic bezel warps with time and exposure.  With these design, deficiencies models are rarely found in good condition.

The importance in Seiko history and the rarity of good examples makes the watch very desirable, and the starburst models are somewhat rarer.

The grail watch would be the NOS J12082 as in the original case above, or with the original stainless bracelet below.  A lovely, non-faded (boxed) watch of 37mm, which would adorn any wrist.

The SEIKO SilverWave, with the tsunami logo on the case back represented the first of a long line of Seiko diver’s watches.

Below is the two part caseback, J12082 which started the line. 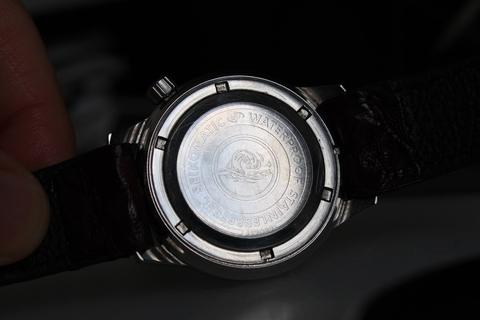 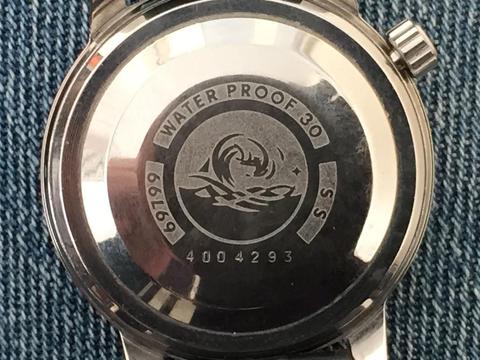