The Seiko Bullhead 6138-0040 was introduced in 1969 as part of the  “Seiko 5” family. According to Seiko’s official website, the “5 Sports” line came to be known as such because of five defining traits. These attributes are automatic winding, day/date displayed in a single window, water resistance, recessed crown at the 4 o’clock position, and a durable case and bracelet. Condensed into affordable, high-performance watches, they came in different guises aimed at a younger generation with very active lifestyles. [1] 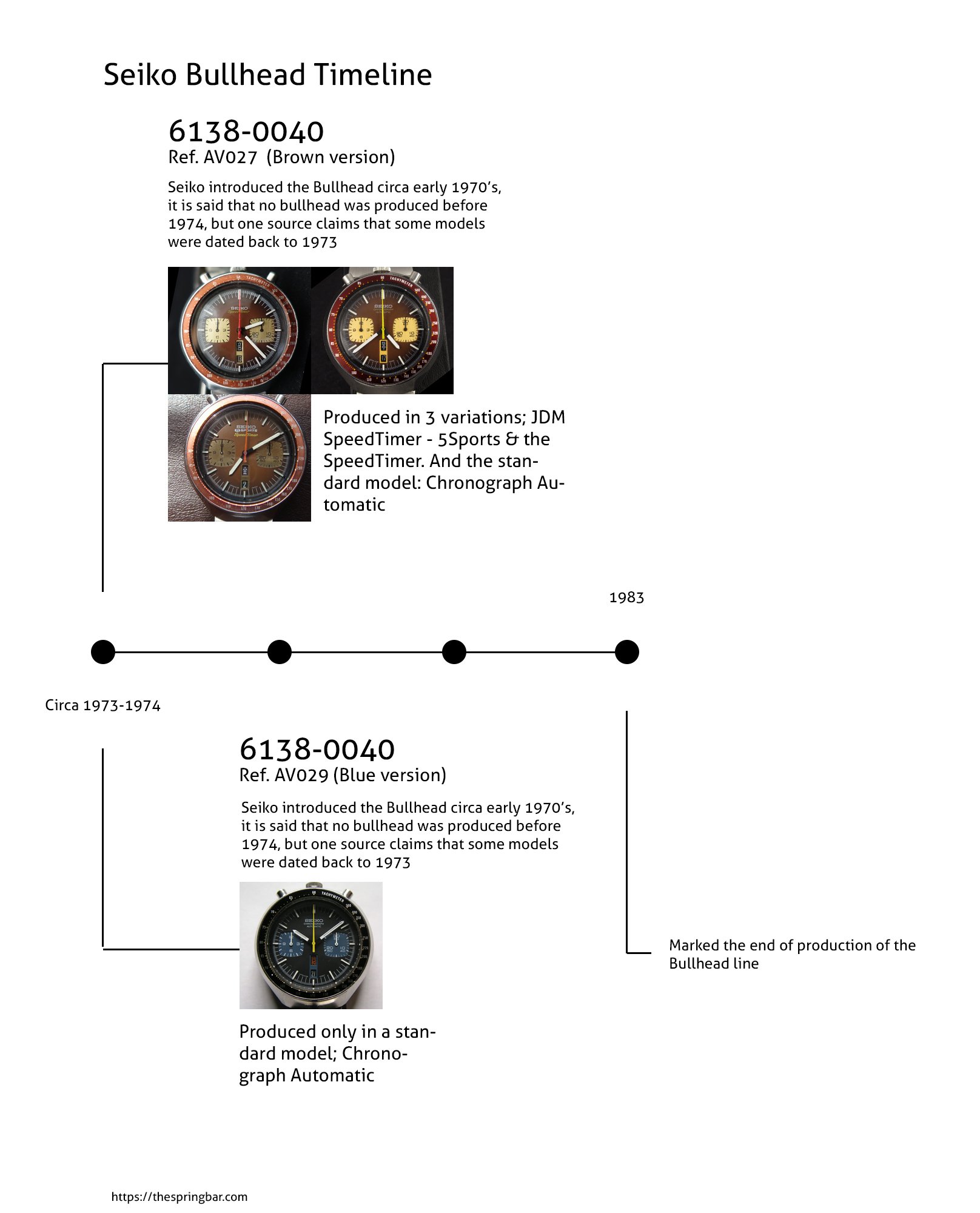 Upon receiving the honour of being the official timekeeper of the 1964 Olympic Games hosted by its homeland, Seiko, the premiere Japanese watchmaker, responded by developing for the technology-driven nation its first-ever chronograph and then exceeding this standard with its own Grand Seiko Standard. Five years later Seiko followed through with an even bigger coup: giving the world the first-ever automatic chronograph movement produced in a mass scale, the 6139.  Along with its successor, the caliber 6138 movement, Seiko holds the distinction of having the first automatic chronograph to equip the column wheel and vertical coupling as standard features. What this meant was a new standard for accuracy and precision in watch movements, laying down a template that still serves as a guide for world-leading watch manufacturers 30 years on. [2] 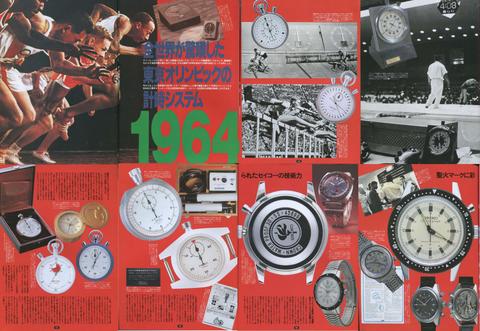 Seiko would release 10 different incarnations housing the revolutionary 6138 movement, with a total of 18 variants, from 1971 until the end of production in 1979.  Famed for its reliability and requiring hardly any servicing at all, these timepieces are some of the most desirable Seiko watches among vintage watch collectors. It is widely accepted that the most sought after member of the 6138 family is the Seiko 6138-0040. Also known as the “Seiko Bullhead” to collectors, it was called as such due to the distinctive setting of the chronograph pushers at 12 o’clock, over the watch band which resembled a bull’s horned head.  It is said that this design came about to prevent the wearer from inadvertently pushing the buttons that controlled its chronograph functions. [3]

The 6138B movement used for Seiko Bullhead

The Seiko Bullhead was released in two colorways; a brown version which had a reddish brown dial complemented by golden subdials, and black version which came with steely blue sub-dials that resembled a monochromatic colour effect. Both of these Bullheads were released as a standard “Chronograph Automatic” version and was marked either as  Reference 6138-0049 or Reference 6138-0040, depending on what market the watch was originally sold in. Additionally, the brown dial Bullhead was released in a JDM version, or the Speed-Timer; there are two versions of the brown bullhead Speed-Timer. One  is marked “Seiko Speed-Timer” on the dial; while the other variant is marked “Seiko 5Sports Speed-Timer”. No black dialed “Speed-Timer” version was ever produced by Seiko.

Produced in vast quantities, the Bullhead would never become a rare watch. However, it has reached cult status due to a combination of its modern-contemporary looks and unpretentious affordability. Released in the same year as one of the rarest collector’s watches, the Omega Bullhead, the Seiko 6138-0040 & 6138-0049 could easily stand toe-to-toe in terms of technical capabilities and features. [5]

DETAILS AND SPECIFICATIONS OF SEIKO BULLHEAD

Seiko is part of a select group of watchmakers in the world that has produced all of its components in-house throughout the entirety of their existence. The Seiko 6138-0040 came equipped with two Seiko original inventions. The first of which is an unbreakable alloy known as “diaflex” that was used as the material for its mainspring. Secondly, a system known as “diashock” was first implemented by Seiko in the 1960s. These innovations are now fixtures installed in most of Seiko’s watches to this very day. [4] 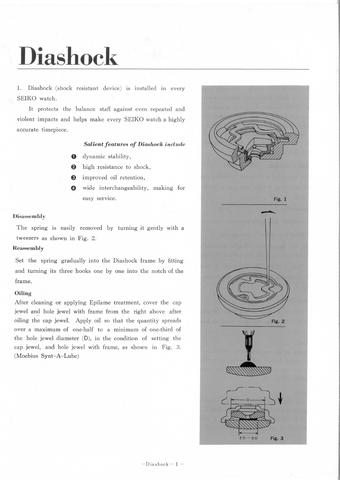 Information about the ‘diashock’ device taken from the Seiko manual

The 6138 movement was developed by Suwa Seikosha, a branch of the Seiko Corporation, as evidenced by the Suwa logo located on the dial at the 6 o’clock position. [6]  Although touted as the successor of the 6139 movement, both were manufactured until 1979. The significance of both these movements to Seiko’s history cannot be stated enough, as these gave them the honour of creating the world’s first automatic chronograph movement that features a column wheel and a vertical coupling mechanism. There were also 2 versions of the 6138 movement; 6138A with 21 jewels, and 6138B with 23 jewels. Both versions were classified as 2 register chronographs, equipped with a manual wind day/date indicator. The specifications for both versions are a height of 7.9mm and a movement diameter of 27.4mm, allowing them to accurately measure up to  ⅙ of a second, or 21,600 beats per hour. Seiko successfully mass-produced the layout for the column wheel and the vertical coupling mechanism, which later on became mainstream, and was adapted by Rolex for the development of the in-house movement that they would use on the Daytona. This would come about some 3 decades later, a testament to the innovative advancements offered by the Seiko brand to watchmakers the world over. [3]

The 2 subdials for the Seiko Bullhead feature a 30-minute and 12-hour register, as well as a 60-second sweep. The Seiko 6138-0040 comes with a dial reference number on either side of the vertical column day and date wheel. The Seiko Chronograph Automatic (brown and black dial) has a reference number of “6138-0060T”. The Japanese Domestic versions, the Seiko Speed-Timer and the Seiko 5Sports Speed-Timer, have dial reference numbers “6138-0071T” and “6138-0070T” respectively. [7] For all versions, the numbering of the Seiko 6138-0040 came in Arabic numerals. The Bullhead watch hands come in the pencil-style and are white. The Chronograph hands have a central lume.  The hands on the sub-dials are in the obelisque style and come in black or white for the brown and black colour variations respectively. [8]  The sweep second hands are yellow on the Chronometer models and maroon on the JDM versions. The day wheel of JDM versions is written in Kanji, while the international Seiko Chronograph model is written in either English or Spanish.

The Speed-Timer variation with its 6138-0071T reference number

The cushion style case of the Seiko 6138-0040 is made of pure stainless steel with a matte finish and highly brushed, polished edges. The Bullhead is one of the biggest and bulkiest watches ever produced by Seiko. It measures 44mm in diameter (with a length of 45mm from lug to lug) and a height of 16mm. It is also one of the thickest Seiko watches available. Measuring at 15mm, they are quite difficult to wear, especially if you plan on fitting them under your cuffs. The case back of the Seiko 6138-0040 is a screw-down type, imprinted with the words “Seiko”, “water-resistant”, and the Suwa logo. The relatively large size of the Seiko Bullhead contributes to its appeal and desirability. However, this very trait makes it susceptible to the nuances of everyday wear and tear, and few models have survived without nicks and scratches. The Bullhead was primarily marketed as a driver’s watch. With that being said, the orientation of the case has a slight tilt at the 12 o’clock position to give it functionality when used in a motorsport setting.

Staying true to its heritage, the crystal for the 6138-0040 is an in-house manufactured Seiko Hardlex. Hardlex glass is a synthetic mineral crystal that is extremely resistant to scratches. Hardlex crystal is extensively used by Seiko in some of its other watches, most notably in their PULSAR and LORUS models.

The outer bezel of the Seiko 6138-0040 is non-rotating. More notably, it is inscribed with a tachymeter, a scale which drivers use to measure speed over a given distance. [9] Depending on the version of the Seiko Bullhead, there is a slight difference in the color index of the tachymeter,  although all versions have the numbering of the tachymeter in silver.

This section is devoted to providing a detailed description of the Seiko 6138-0040 “Bullhead”. As is the case for most vintage watches, there are many instances in which models have been equipped with aftermarket pieces and components. One of the defining traits of an old Seiko is that they seem to have a problem in keeping out moisture, so be wary of models that show signs of mold or rust, particularly to the inside case and the threads of the case-back screws. [10]  Keep in mind that the value of a vintage watch is dependent on its condition, however, it is extremely difficult to find a pristine, unscratched specimen of the Seiko 6138-0040 as they are quite bulky and prone to physical contact. Also note that the original standard bracelet is a steel, folded fishbone style with a stamped steel-folding clasp for “Chronograph Automatic” versions, while the straps for JDM Bullheads are steel oyster style. These should be stamped with either “Seiko SpeedTimer” or “Seiko 5Sports SpeedTimer”. All versions of the bullhead have asymmetrical bracelets that have wider attachments to the top of the case than to the bottom, due to the orientation of its case lugs. One of the easiest ways to determine if the strap is not original is to check if they are attached in proportion to the watch. [2]

The differences that can be noted in between all the variations of the Seiko 6138-0040 lies in a combination of aesthetics and market releases. Therefore a budding Seiko Bullhead collector is better off starting with the entry-level brown JDM “Speed-Timer”. The JDM version is inherently inferior to a brown “Automatic Chronograph” due to the fact that it has no luminous material present on its hands. This makes it less functional. The “Speed-Timer” also starts off as an inferior model in comparison to the other JDM version, the brown “5Sports”. [2]

With a total of three versions of the Seiko Brown Bullhead, the “Chronograph Automatic” and the “5Sports Speed-Timer” are on equal footing. The “Chronograph Automatic” is also the only one of the versions with the case back reference number “6138-0049”. Along with luminous hands, this quirk automatically gives it certain desirability, as well as having the quintessential “look” of a Seiko Bullhead. On the other hand, the brown “5Sports Speed-Timer” is the only version with “5Sports” written on the dial.[2]

A Chronograph Automatic with reference number 6138-0049

Since the Seiko 6138-0040 was produced in high quantities in the 1970s, the best choice when purchasing one is to get a NOS, or new old stock. NOS version of a watch as commonplace as the Seiko 6138-0040 could have easily been swept through the machinations of inventory management and come up for sale relatively frequently. With a combination of time and fortuitousness, they could end up with something that has appreciated in value. If your serious about collecting this timepiece, NOS is the way to go.

Just a heads up; there are several Bullhead knock-offs floating around on eBay. At first glance, they appear to be NOS watches, but a closer inspection gives off the differences. If you are interested to purchase a Bullhead, we suggest that you do some research beforehand. 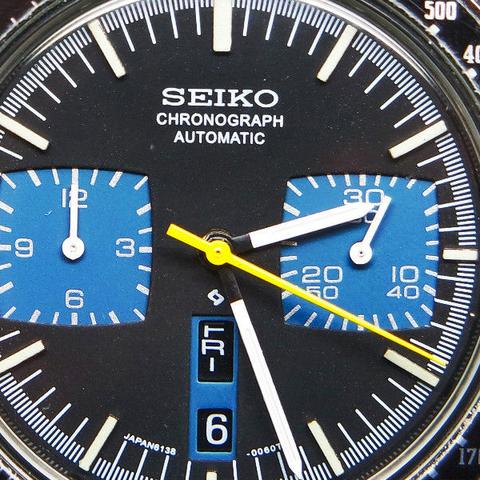 Dial of a black Bullhead replica 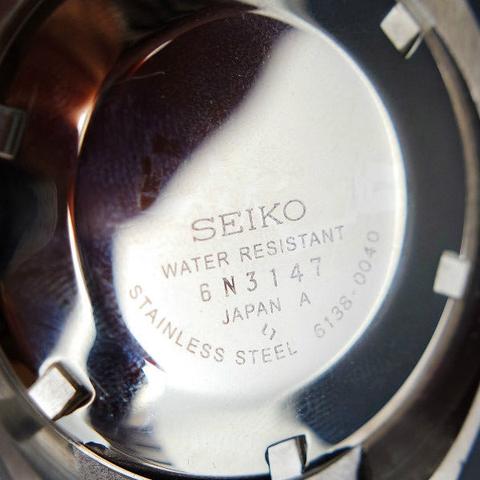 6N3147 is the serial number of the fake Bullheads that are being produced. Notice that the stamping is relatively lighter than the genuine one.

Word on the street that the replicas also come in kits. 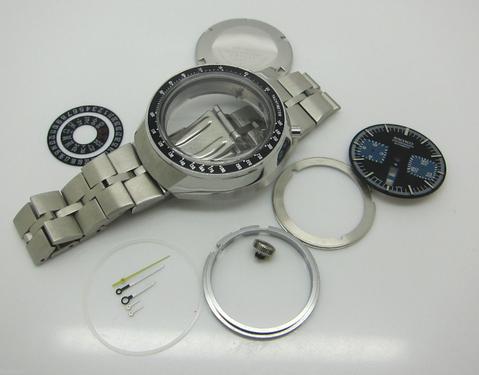